For the first time since the 1940s, more Mexicans have been leaving the U.S. to return home than arriving, a reversal that brings down the curtain on the largest immigration wave in modern American history, according to a new study.

Mexican migration has been falling for some time. But the Pew Research Center figures released Thursday suggest that the surge in legal and illegal Mexican immigration that helped transform America—and remains a contentious issue on the presidential campaign trail—may have peaked for good.

“Mexican migration to the U.S. has been one of the world’s great migration stories, and this data shows it has come to an end,” said Mark Hugo Lopez, director of Pew’s Hispanic research. Pew based its study on an analysis of U.S. and Mexican government data for the years 2009 to 2014.

In a shift, Asians now represent the only group in the U.S. that is growing because of immigration.

About 16 million Mexicans flocked to the U.S. during the last 40 years—about half of them illegally. But between 2009 and 2014, some one million returned to their country of origin, while 870,000 headed to the U.S., according to the report.

Pew’s last study on Mexican immigration, in 2012, looked at the five-year period from mid-2005 to early 2010, when the outflow of Mexicans to the U.S. and return to Mexico were roughly even. During those years, 1.4 million Mexicans migrated north to the U. S.—fewer than half as many as in the previous five-year period, when three million came.

U.S. economic expansion fueled heavy immigration in the 1990s as Mexicans found jobs in construction, service industries and other sectors. But even a strong American economic recovery is unlikely to reinvigorate Mexican immigration, many experts believe. 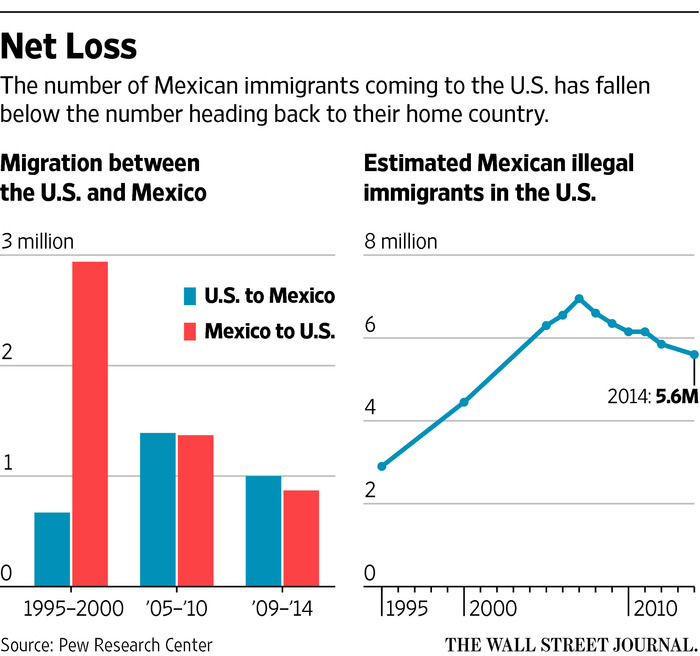 Several factors have undermined the lure of the U.S.

Mexican families have fewer mouths to feed as the country’s birthrate has declined to near replacement level, similar to that of the U.S., relieving economic pressure that motivated migrants to go north to find higher-paying jobs than are available in Mexico. Meanwhile, Mexico’s economy improved.

“The days of mass immigration from Mexico are over,” said Pia Orrenius, senior economist at the Federal Reserve Bank of Dallas who studies migration. “Slower population growth in Mexico along with a stable economy and an expanded public-safety net are developments that have trimmed the ‘push factor.’ ”

The Mexican undocumented population has continued to fall since peaking in 2007 at 6.9 million. It stood at 5.6 million in 2014, according to Pew estimates.

All told, the number of undocumented Mexicans in the U.S. has dropped by more than one million since 2007.

Arrests of Mexicans at the Southwest border, a key indicator of attempted illegal entry, are at the lowest level since the 1970s. In fiscal 2014, the U.S. apprehended 227,000 Mexicans there.

Meanwhile, apprehensions of non-Mexican migrants, mostly from Central America, totaled 253,000. It was the first year that border agents caught more non-Mexicans than Mexicans.

Family ties are the primary reason Mexicans return home, the report said. Sixty-one percent of Mexicans who had lived in the U.S. in 2009 and returned by 2014 said that family reunification was their main motivation, according to a survey by Mexican authorities cited by Pew.

Only 14% said they had been deported; 6% cited employment as a reason to return. About 18% gave other reasons.

Despite the decline in Mexicans coming to the U.S., illegal immigration has featured prominently in presidential debates, with some candidates saying border security should be boosted.

Donald Trump has called for deporting about 11 million people in the U.S. without status, while some other GOP candidates, including Jeb Bush, criticized that position.

Louis DeSipio, a professor of political science at the University of California, Irvine, said the Mexican reverse-migration should send a message to lawmakers that an immigration overhaul may be needed to ensure economic growth. Some politicians “are missing the emerging reality of U.S. immigration,” he said. “Immigration reform is needed to ensure that the labor needs of the U.S. economy can continue to be met.”